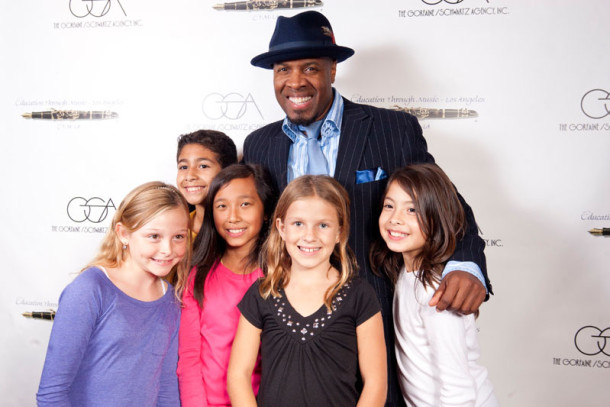 (LOS ANGELES, CA) The stars aligned last night at House of Blues on Sunset Boulevard when L.A.’s music and film community gathered to honor educators and two of their own at Education Through Music–Los Angeles’ annual gala. More than thousands were raised in an evening that honored local music teacher Julie West and acclaimed film composer Christopher Young (Hellraiser, Species, The Rum Diary).

ETM-LA, a 501(c)3 non-profit organization, came onto the Los Angeles scene 6 years ago, just as budget cuts were forcing many local public schools to abandon their music programs. Thanks to ETM-LA’s partnerships with several local schools, thousands of children in Los Angeles County (LAUSD, Burbank USD, Compton USD) are now beneficiaries of integrated music programs in their schools. It is widely accepted among educators that learning in music is as fundamental to the growth of children’s learning in all areas including math, science and literacy.

Film and television star Ed Helms (The Office, Cedar Rapids) emceed the evening’s festivities and entertained the crowd with his old time music outfit The Lonesome Trio. Mr. Helms was joined by his Office co-star Kate Flannery for the evening’s auction and together they had the crowd in stitches. Later in the program The Lonesome Trio was also joined for a number by Thomas Lennon (Reno 911’s Lt. Dangle) and his alter ego Blind Joe Jeffers for a comedic protest song.

Earlier in the evening Michael Bearden, former Musical Director for Michael Jackson’s “This Is It,” and his killer band, Solace, backed a group of young musicians and singers who have been recipients of ETM-LA programs over the years. Solace entertained the festive crowd late into the evening, long after the student musicians who performed earlier in the show were back home and tucked into their beds.

After hosting the successful gathering, ETM-LA Executive Director, Victoria Lanier, exclaimed “L.A.’s music and music education community came together last night to ensure that even more children will have access to in-school music programs in the future. We raised a substantial amount of funding for Los Angeles kids which will allow us to continue on our mission to provide music education for disadvantaged LA school children.”